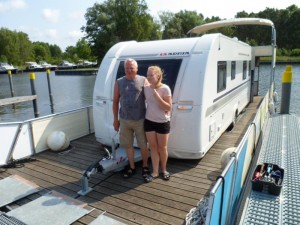 We had a fantastic week onboard Freedo. Went as far as Lüchen and Templin. We were very lucky that the weather were good, with temperatures up to 34 degrees and a water temperature of 26 deg. It was great to jump in the water from the deck, to cool of a bit when it was really hot.
We only had two nights in harbor, otherwise moored at the lock’s. It was nice to sit under the sunroof and have a cold beer after a long day’s journey on the river.
I have showed my friends and collegues the pictures from the trip, and many became very exicted about the concept. So it may very well be that you will get new customers next season.
We are absolutely sure that we will try this again. Not sure if it can be arranged in the last part of july 2016, but we will look into it. 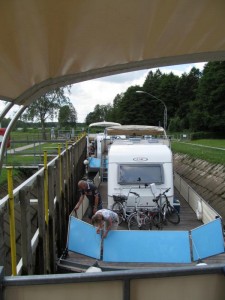 I attached a picture taken when three campers vent into the Kannenburg lock at the same time, not leaving much space left.

Jumping from the deck